ANTIOCH, Ill. (February 24, 2022) — At this week’s Antioch Village Board meeting, a police officer was recognized for an act of heroism. Antioch Police Officer Ray Galioto is the first recipient of the department’s Commendation Award. He was recognized for his actions during a response to a traffic accident in the village last fall.

At the meeting, Antioch Police Chief Geoffrey Guttschow described Galioto as “a reflection of the highest caliber of police officers our community is blessed with having.”

On the evening of November 18, 2021, Antioch Police Officers were dispatched to a traffic crash with injuries near the intersection of Route 173 and Grimm Road. Antioch Police Officer Ray Galioto was one of the first to arrive on the scene, discovering one of the drivers involved in the accident, was pinned upside down in their vehicle. The minivan was involved in a head-on collision and had rolled over.

Without hesitation or regard for his safety, Officer Galioto entered the minivan through the rear hatch, climbing over and around blood-covered debris, broken glass, and the badly deformed passenger compartment. For more than 30 minutes, Officer Galioto used his own body to both support the driver, and to shield her from breaking glass, and the heavy equipment being used by the fire department to cut the vehicle apart. Despite the chaos of the scene, Officer Galioto remained focused on protecting and comforting the driver, who was experiencing severe pain because of her injuries. Officer Galioto never left the driver alone, remaining at her side until she was removed from the vehicle.

Guttschow says the award was created to recognize actions in circumstances where a police officer demonstrates an outstanding performance of their duties under unusual, complicated, or hazardous conditions.

“Officer Galioto’s actions that evening embody what it means to be a public servant”, said Chief Guttschow.

Galioto has been a police officer for more than 12 years, serving the Village of Antioch since 2020. 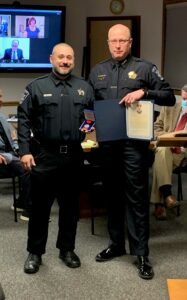