THE VILLAGE IS INVOLVED IN MANY PROJECTS INCLUDING ROAD IMPROVEMENTS, LANDDEVELOPMENT, SEWER STUDIES AND OTHER CAPITAL IMPROVEMENT PROJECTS. CLICK ON EACH PROJECT BELOW FOR A DESCRIPTION AND STATUS.

The current history of this area began about 50 years ago when an approximate 900 foot section of the Sequoit Creek that ran through the 3.5-acre site was fitted with a 102″ metal culvert and was buried to make way for a commercial auto dealership development.

Over time, the property surrounding the culvert was vacated of commercial uses, and the buildings that once occupied the land and surrounding area were removed.

Beginning in 2016, the culvert began to fail, creating sinkholes.

By 2019 the culvert had failed completely and impaired the flow of the creek, presenting both a general flooding hazard for downtown and a threat of flooding for upstream properties. The Village mitigated the potential for flooding by opening the creek and removing most of the metal piping.

In 2021, after acquiring the remainder of the property in the project area, the Village engaged the Lakota Group, a planning and landscape architecture firm, to seek the Antioch community’s feedback as to the final use and redevelopment of the property. With community input, the Lakota Group is working to produce detailed conceptual plans for the redevelopment of the property as an open space with an exposed or daylighted Sequoit Creek, with appropriate flood mitigation attributes and other attractive programming and park features.

What is going on now?

The Lakota Group and Strand Engineering presented its design and engineering proposals to the Antioch Village Board in January of this year. The proposal was unanimously approved by the Village Board. The project now has moved to the engineering phase. Work has already started to secure the required permits needed for the project. Once the Village is permitted to break ground, construction will begin immediately.

Early 2022 has been busy with engineering and permitting work for the project. The first visible signs of construction could begin in late 2022.

Construction along the creek and major construction milestones will occur in 2023, with the grand opening of the redeveloped site expected sometime in 2024, if not earlier. Once complete, the site will become a major gateway and anchor to Downtown Antioch and an important new hub of Village life.

Project updates can be found online at antioch.il.gov. Questions or comments can also be directed to Village Hall at 847-395-1000. 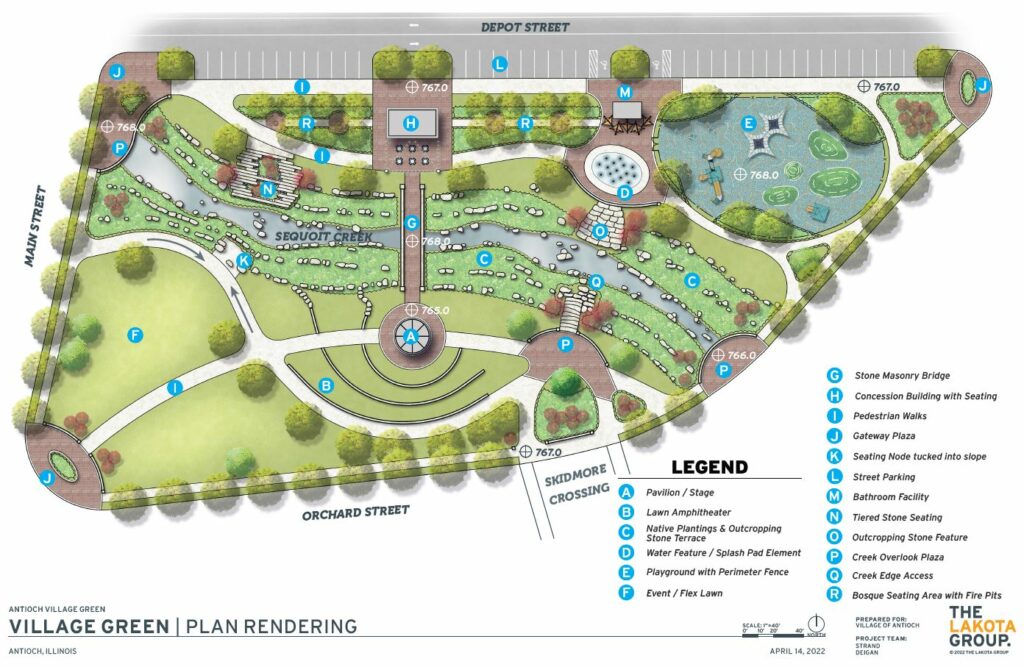 History of the project:

When it was annexed in 2017, Grimm Road was in very poor condition and had become hazardous for travel. The pavement was extremely rough and poor drainage facilities caused water to pond on the roadway. Additionally, the intersection of Grimm Road and Route 173 had developed a growing occurrence of traffic accidents.

The Village is working to reopen Grimm Road as a completely reconstructed roadway with a slightly different route.  (See picture).  When reopened, the roadway will connect with Route 173 between Kunes Ford and the Body Craft auto body shop, which is slightly west of where it had connected.  This new connection to Route 173 will create a safer intersection than the previous one.  Also, the reconstructed roadway will feature improved drainage and a multi-use path.

What is going on now?

Village of Antioch contract engineering firm HR Green presented a project update to the Village Board Committee of the Whole at the October 27, 2021 meeting to give the most current status and timeline for project completion.  You can view the video of the meeting HERE.

In 2022, village engineers expect initial roadway grading work and rail crossing work to begin.  The remaining agreements and permitting will also be completed in 2022.  As of their October update to the Village Board, HR Green reported that 75% of the engineering design work has already been completed.

Construction of the roadway is expected to take two years, beginning in either 2023 or 2024.  The timeline of the project is largely contingent upon how quickly the village can receive funding.  Village staff and engineers have a goal to see construction completed as quickly as possible while optimizing as much outside funding as possible.

Project updates can be found online at antioch.il.gov. Questions or comments can also be directed to Village Hall at 847-395-1000. 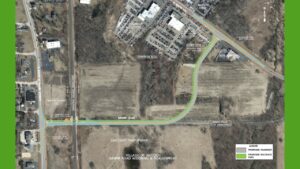 About the Bike Path

For years, the bike path between Tiffany Road and Hillside Avenue experienced flooding issues. These issues were due to the path being constructed several decades ago in the floodplain without a drainage system. The path also runs through wetlands, which added to the problem.

After a long process which included engineering to elevate the path and create drainage that will allow the path to be passable in all but the most serious flood conditions, obtaining permits from the Army Corps of Engineers, the Illinois Department of Natural Resources, and the Lake County Stormwater Management Commission, and then putting the project out for Bid, the project has been substantially completed as of the late fall of 2020.

The Village would like to thank all our residents for their patience during this process. We can’t wait to see the bike path being enjoyed by current and future residents.

The Village of Antioch is currently reviewing proposals received for professional design services related to placemaking improvements in the Downtown.  The selected vendor will develop a Downtown Beautification Plan to include streetscapes, parking lots, arcades, and the Pittman property with the goal of defining our downtown character, improving safety, increasing vibrancy and setting the stage for private investment.  Integral to the process for determining the use and programming of the Downtown environment will be robust public input and engagement.  Look for opportunities to participate in the design process for the improvement and beautification of Downtown Antioch. Project updates can be found online at antioch.il.gov. Questions or comments can also be directed to Village Hall at 847-395-1000.